We will never forget the cruel things that happened in Paris the last few days. Some cartoonists were killed by extremists. The artists had made drawings for their magazine Charlie Hebdo. Tomorrow there will be thousands of people in the streets of Paris to protest against it. Also in other countries all over the world. The villains felt insulted and they took revenge. An other barbarian shot down 4 people in a Jewish supermarket.

In our regional competition we are not allowed to show films about politics, movies that are not decent and films that may insult people. I have checked the BIAFF-rules. They don't say anything about that problem. But I think it is clear.

There is freedom of opinion, freedom of expression, There is freedom of the press. There is democracy in our countries. We are allowed to criticize something. We may use sarcasm, satire, irony, mockery, not only in drawings, but also in films. However, rude language, vulgarity and extreme provocation cannot be accepted. And ... you never kill people who used a pen or pencil as a "weapon".

Now I fear there will be more and more polarisation in our society and the sad consequences of it. World War III? But a different war. Hopefully I am exaggerating.

About killing Jews... I made a dramatized documentary about Breendonk some years ago. The camp is not far from us. During WWII Jews were imprisoned there. They were tortured. They were hanged. Guantánamo is/was similar. There was a message in my film. Let's hope it will never happen again, but I fear that...

Oh, Jesus, I am a pessimist! Help me!
Willy Van der Linden
Top

We are open in BIAFF to all sorts of views expressed in film. The only practical aspect is that if you are a competitive film maker, any controversial stance is likely to alienate some people, possibly even some judges, and thus reduce your chances of winning awards.

I should say that we ask and expect all our judges to set aside their own prejudices and moral judgements when considering movies ... but judges are human.

Personally I welcome strong views since far too many of our British films are bland.

As to the Charlie Hebdo events - you do not have to go back very far in the history of most religions to find people dishing out death to people regarded as unbelievers or blasphemers. In Western Christianity we have grown out of that kind of blind and fanatical expression of belief. We can only hope that extremists of Islam will do the same.

My personal view is that behind much of the hate - as expressed in the name of religion and also of politics - is racism. We distrust foreigners ... whether they come from the next village or the next country. That is why I am deeply proud that the IAC British Competition has for decades been an international event. We welcome people from other countries and get a chance to see their views on the world. If we are very lucky some of them come to the BIAFF festival so we can get to know them in person. I am also proud of the team of people from "the island" (as others in Europe sometimes call us) who go to the UNICA festival to enjoy films from every country and to meet people from all over the world.

Willy, you know that you have so many friends in Britain, who welcome you to BIAFF each year. Among other overseas visitors planning to attend are Ned Cordery from the USA and Romy Van Krieken from the Netherlands. We hope that perhaps Daniel Carracci from France will come over and some of our German friends too, maybe even the team from Korea.
Top

Dave Watterson wrote: Personally I welcome strong views since far too many of our British films are bland.

Without doubt, Dave, the best documentaries are those that express and justify a strong opinion. Someone I know is very involved in producing videos against fracking. He has received some criticism for showing bias. To me that's what gives the film legs.
Tim
Proud to be an amateur film maker - I do it for the love of it
Top

Oh Willy, your avatar on this forum is based on the character of "Oor Wullie" a newspaper cartoon ... there are now images of him on a Scottish newspaper and around the web: 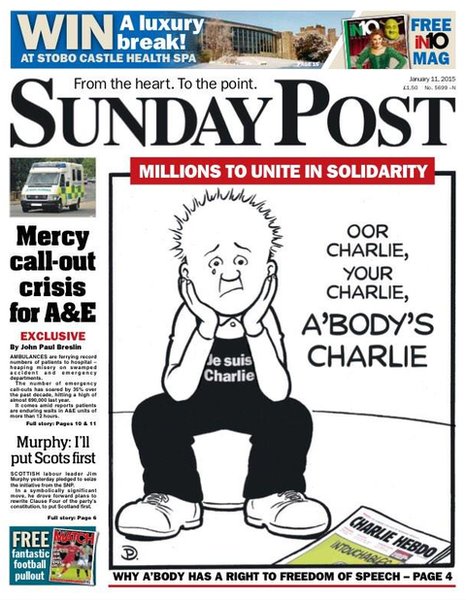 Fantastic cartoon, Dave! Je suis Charlie! You are right. Not only racism is disgusting. Also xenophobia. Therefore I loved the French colours on the façade of the National Gallery and on Tower Bridge today. Let me sing a beautiful German song that I learnt at school about 50 years ago. I would like to sing it on occasion of the fantastic demonstrations in Paris, London, Brussels, Berlin ... against hatred and intolerance. Listen:

"Die Gedanken sind frei, wer kann sie erraten. Sie fliegen vorbei wie nächtliche Schatten ..." In English: "Thoughts are free. Who can guess them? They fly by like nocturnal shadows. No man can know them, no hunter can shoot them with powder and lead... Thoughts are free! ...... I think what I want, and what delights me, still always reticent as it is suitable. My wish and desire, no one can deny me and so it will always be... Thoughts are free ..... And if I am thrown into the darkest dungeon, all these futile works, because my thoughts tear all gates and walls apart... Thoughts are free! Sorry that I sing out of tune from time to time. Forgive me.

Now let's try to make a short film against hatred and intolerance. Actually I already made one against racism and homophobia some years ago. Maybe you remember "Bakri" (4 stars in Harrogate). My actor Idrissi Mbengue from Senegal is on my facebook and he has become a TV-star. Some time ago he was proud to tell me that he got an important role in a TV-film.
Willy Van der Linden
Top

I too learned that song at school in German class, though its meaning was more vague in my child's mind than it is now.
I also remember Bakri well.

Does it sound harsh to say that as artists with cameras we accept inspiration wherever it arises ... from songs, from memories and even from tragedies and outrage?
Top

There is a line to be drawn somewhere between expressing an opinion and deliberately provoking anger.

There is also a line to be drawn between acceptable and unacceptable violence. Why is it acceptable for a country to bomb another one but not for an individual to do the same? For me the line is somewhere around the 'reasonable force' that our police may use and no higher, but others differ. I shall not be using or advocating violence.
Peter Copestake
Top

Some comments on this thread:-

I am quite aware that my remarks, sometimes, about judges comments, (within the IaC) can’t call ‘em “critiques” and also other perceived faults is much disliked in some quarters but everything and anything can be improved!

However that’s not “the name of the game” this time……

I’ll take you back to the Cotswold International Film and Video Festival which I organised for nine years until funding cuts enforced its closure. (Dave W. knows all about this). It was open to None-Pros, Pros., Students. (I even personally helped six Young Lads from Denmark one year, great guys).

There were 947 films in the nine years from all over the Planet – UK, Australia, New Zealand, Tasmania, South Africa, Europe, America, Canada etc. – even from Azerbaijan, “Children Of The Oil”, a top winner. I was contacted from Paris about this visit. They arrived, “different”, nice, charming, yes. The Producer, his four ladies and bearing gifts! Subsequently I received an e-mail of thanks from their Government!

So communicating and meeting so many was a privilege, a result of our “Hobby” although I’m unsure of that word too now, like “amateur”, with the artistic and technical expertise involved and displayed.

My point here is this:-

What is obvious is that we have all made the world a “Global Village” of friends of diverse and different cultures, backgrounds, languages – the result of a “common interest” which to a large extend binds us….Where it only the same for all people.

The permissibility of depictions of Muhammed in Islam has been a contentious issue, Wikipedia says. Oral and written descriptions are readily accepted by all traditions of Islam, but there is a disagreement about visual descriptions. Therefore I have my doubts about the front page of Charlie Hebdo. Maybe they exaggerated.

Once I made a one minute movie called "Bite". Two Muslims are kneeling on the beach. They are praying. One minute later they catch a giant fish, but you can only see its head and its bone. Suddenly they see a sign "Dead Sea". I thought it was a good film, but some judges did not appreciate it. Maybe they were right. I also showed that film at BIAFF. At that time there were no religious problems in the world. I think that my one minute movie was not provocative, but we must be careful.

Anyway I would never show a film with the prophet Muhammed in it. Freedom of speech and expression? Of course, I am for it, but we must respect each other's belief.
Willy Van der Linden
Top
Post Reply
9 posts • Page 1 of 1

Return to “Club and General Issues”