Authors' views are not necessarily those of the IAC. Main website at www.theiac.org.uk. Note: this site uses harmless cookies.
https://dialog.theiac.org.uk/dialog/

by Huey Walker
For those of you who have read Doug Collender's letter on page 14 of the December 2014 issue of Film & Video Maker, followed by the extraordinary, bizarre, and astonishing reply from Linda Gough the IAC president.

Here below, might be a solution to all our problems.

If anyone else wants to have a go, please let us know on this forum, or at http://www.exeterfilms.com 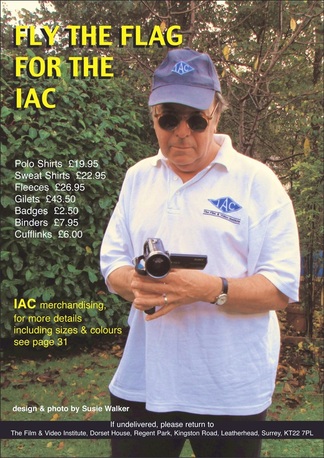 by Peter Stedman
It's the wrong way around. The model should have taken the picture and the photographer . . . . . .

by Dave Watterson
Your picture is a funny comment on our aging membership ... but Doug's complaint was that the cameras on the real adverts are old, not that the models are young.

The camera issue is a worry for any club webmaster who wants to show a camcorder as a symbol of what the club does ... but with the kit changing every six months it can look outdated quickly.

I am puzzled about why you find Linda's response so

. She is just pointing out that for an advertising photo shoot, like a film shoot, the problem is to get all the right people and kit together on a suitable location (and hopefully with decent weather) at the same time. With our voluntary organisation that is not always easy.

Do you think IAC should also stock those cool dark-glasses? !

Dave Watterson wrote: The camera issue is a worry for any club webmaster who wants to show a camcorder as a symbol of what the club does ... but with the kit changing every six months it can look outdated quickly.

Then that should be an incentive to change the website a bit more frequently! I would have thought that you, Dave, of all people would see that as a benefit

by Dave Watterson
Is anyone else prepared to create a parody picture?

by Lee Prescott
Well, helloh there!

Das ist sehr lustig! At last the IAC is typified, is seen, by all of my acquaintance under the age of sixty and certainly ALL the Young people we work with, the IAC having earned their "respect" through the IACs and associated judges ridiculous comments which we have just had more examples of and from El Presidentae's location!

Bizarre? Does it really matter anymore? Whilst Doug's and Huey's comments are quite valid there are more important considerations that need properly addressing IF the IAC is to continue at all, the most important being the interest and membership of Young People.

In 2010 stupid judges (associated) with the IAC managed to thoroughly wreck our efforts losing all of 23 / 25 potential members all under 18 years of age and again this year - 2014 - I am quite sure that these "judges" do NOT understand what is meant by "contructive critiques". They certainly understand "useless waffle".

(As John Laurie, Private Frazer, "Dad's Army" was won't to say; ' Doomed, we'er doomed')! ---Without a mass of Younger members.

"Bizarre" crazy I'd say. Here we are, the IaC supposeldy THE orgainisation for None professional, (amateur) film / video makers + etc. and
it can't arrange, shoot, it's own updated advertising picture!!!

Says a lot about the IaC doesn't it?

If I could be bothered I'm sure that I could get a Young Lad and a Lass plus an up to date "Camera" etc. for a shoot. That's IF I could prevail upon them to now do such work for the IaC!

by John Roberts
I have looked long and hard at the image for several days now and have come to the conclusion that I can't see anything wrong with it - in fact when I saw the original post I didn't understand it and wondered what had happened in the magazine to prompt the post in the first place. The wording "If someone else wants to have a go" sounded argumentative, and I assumed that this advert had been printed and a reader had disliked it for some reason.

Now (I think) I understand what is going on a little better I find the problem with the image is that, personally, I don't find it a parody at all, because it's exactly what I would expect to find in the pages of FVM; It's simply not far enough removed from the original picture. Or am I missing something...?

In my defence I am still waiting for delivery of my FVM...

by ned c
A note to Lee Prescott; Lee you write about all the young film makers you work with and complain about faulty judging that has damaged their enthusiasm for possibly joining the IAC. Can you point us to the YouTube or Vimeo sites where we can see their work? Is there a club/organization they are members of with a website/blog? You are rather vague about the judging, was it part of BIAFF or some other event? What was the nature of the criticism - some details please, that produced such a disastrous result as this may be something that should be addressed but without more information is difficult to assess.

by John Roberts
Ned, I can't speak for Lee but I suspect he may be referring to inter-club competitions and maybe also competitions held between members of his own club that are judged by an external judge. I can honestly say that 50% of the films I have made have been unfairly and unjustly criticised and 'marked down' at local level because a judge brought in from another club might be too 'connected' to one of the competing clubs or is far too subjective. I have seen this happen too many times to discount it as a rare occasion. There are some fine judges on the circuit, who are willing to give up their time and to travel long distances, but they are too few and far between.

Regional and national competitions appear to be quite a bit 'fairer', possibly because the results have to be seen to be justified. BIAFF results are always published (although the judges comments are not, which I believe is a shame) and many of the films can be viewed. National and regional competitions are also usually judged by filmmakers of note and respect, who are members of a different IAC region, results are published in newsletters and discussed at regional or national level. However, local 'club/inter-club' competitions are often, though not always, judged by people who haven't made a film in years and the night just dissolves into a misty haze of anger, confusion and disbelief, which no-one outside of the club(s) involved ever hear about, because there is no justification. The judges decision is final, even if 99% of the room thinks the winning film is the wrong one. And that is a situation impossible to explain to potential new members of a club who have just witnessed a shoddy exhibition of judging...

However, we are digressing from gentlemen and women of a certain age holding outdated equipment. Or maybe we're not...

by ned c
Thanks John; obviously judges need to be chosen more carefully. How does someone qualify as a judge? Regarding Lee's comments, a search through the various IAC Regional Newsletters brought to light a letter by Robbie Mac referring to judges unhelpful comments on a film by a group of young film makers; perhaps the same group. I would like to see the film and if it is up on a site the link would be appreciated.

So, over and out on this one, back to the the subject; advertising never was honest any way.

by John Roberts
Hi Ned - yes, over and out on this one - with a quick post-script. I was chatting to a fellow filmmaker today (who incidentally has just withdrawn their film from inter-club competitions for similar reasons we have chatted about) and I put to them a question: how many local judges of inter-club challenge matches are actually members of the IAC? The answer: no idea, because we couldn't think of any!

And yes - advertising is never honest, but the camera never lies. Unless a filmmaker has hold of it

ned c wrote:A note to Lee Prescott; Lee you write about all the young film makers you work with and complain about faulty judging that has damaged their enthusiasm for possibly joining the IAC. Can you point us to the YouTube or Vimeo sites

Read your posts.....have been incommunicado...sorry....just got back from the sand and dust and it's 1.34hrs GMT !! I will come back to you on these matters a.s.a.p.

by Huey Walker
Excuse me Gentlemen, but could we all stick to the subject of this discussion, which is:

I quite agree with your comments about film judging, but that subject surely requires its own thread.
Why are you trying to hijack this thread that I started?

I only wrote the original piece on the forum after my wife had seen the letter by Doug Collender in the December 2014 issue of FVM.

I nearly wrote the 1914 issue. It might as well have been 1914, and althought there was nothing wrong with designs around 1914,
the back cover here is so badly laid out, and so out of date.

I am no graphic designer, but I would guess, there are more than five font styles, and well over six font sizes on the one page.

But that isn't really important in the IAC is it?

What is important, is that we now all know that IAC Merchandising is stored in the president's loft.

I can see the splash now.

And if you, John, really think that I 'sounded argumentative' then I now understand that it's all in your mind how you see the world.

Everyone else I've spoken to understood exactly what I meant.
Maybe you, John, should actually take a look at the back cover of FVM before you waffle on about things you know nothing about.

I was just pointing out something that seemed a bit ludicrous, ridiculous, farcical, and quite absurd.

I have now paused.

Huey Walker wrote:Excuse me Gentlemen, but could we all stick to the subject of this discussion, which is...

... not the abuse of any member of this forum. I shall refrain from waffling on about things I know nothing about, from my own little argumentative mind. Over and out.
All times are UTC
Page 1 of 4